Malton Museum holds an extensive collection of Roman artefacts, a great proportion of the finds from Roman Malton come from outstanding campaigns of excavation led by Philip Corder at Malton, Langton, and Crambeck. Corder’s collaborator, John Kirk, was instrumental in setting up Malton Museum.

The Roman Fort at Malton was the heart of the Roman Settlement and the reason that it existed in the first place. It was located on the north side of the River Derwent, and the lines of its defences can be seen today in Orchard Fields. It was a large fort and its importance is reinforced by the vitality of the town that grew up around it and south of the river in Norton.

Despite this obvious importance, the only sustained investigation has been the excavation report by Philip Corder in 1930. This centered on the fort’s north-east gate, but also exposed some internal buildings in this area. There was also some trial trenching in the fort interior and elsewhere on the defences. This means we that we can have at this moment a tantalising bare outline of the history of the history of the fort. What is clear is that it remained in occupation from the beginning of the Roman period to the very end.

The fort’s origin lay in the first phase of the Roman military intervention in Yorkshire. There are hints of some earlier activity. There are hints of some of earlier activity in the 70s AD, the same decade in which the legionary fortress at York was founded. However, the first fort that we can be certain of dates to the governorship of Agricola (AD77-83).

Even the name of the fort is uncertain. For many years Malton has been identified with the Latin name Derventio, though some Romanists today believe it to be Delgovicia.

Although little of the fort has been excavated, the collection illustrates every aspect of Roman life in the region and even documents two of Malton’s earliest inhabitants, both members of the military. Candidus, the Commander of the Ala Picentiana, the cavalry unit based in Malton, set up an inscription. One of the soldiers, Lucius Servenius Super, punched his name on his mess tin.

It is unusual to know the names of individual Roman soldiers who lived in the local fort, and other items illustrate something of how they, and the civilians in the settlement, lived. A small but important archive from Langton Villa illustrates rural life.

There are multiple themes which can be drawn from the objects in the collection, these are described in more detail here –  Themes in our Roman Collection. 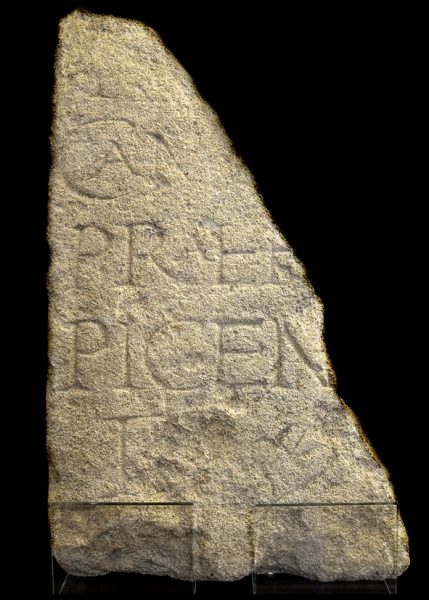 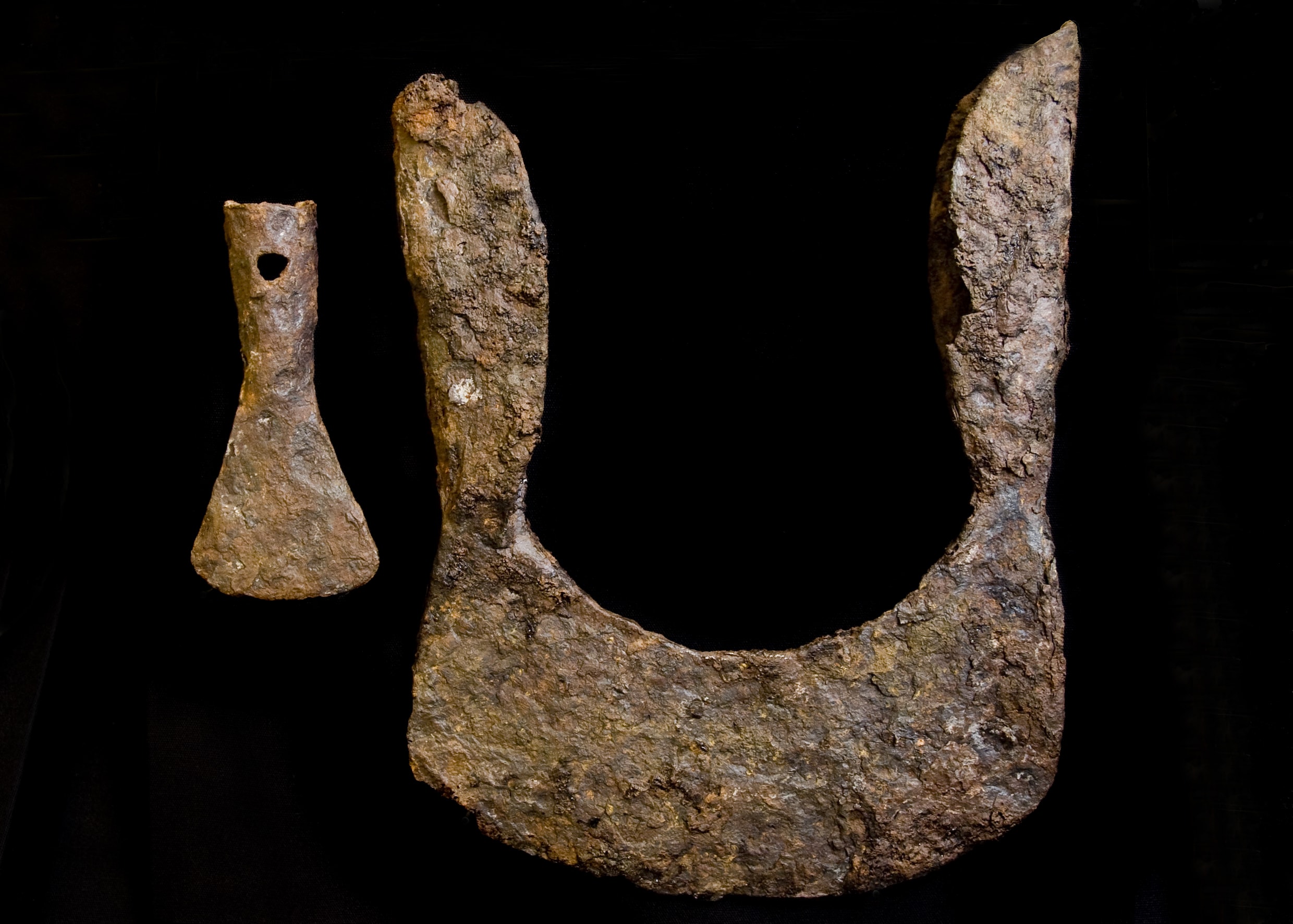 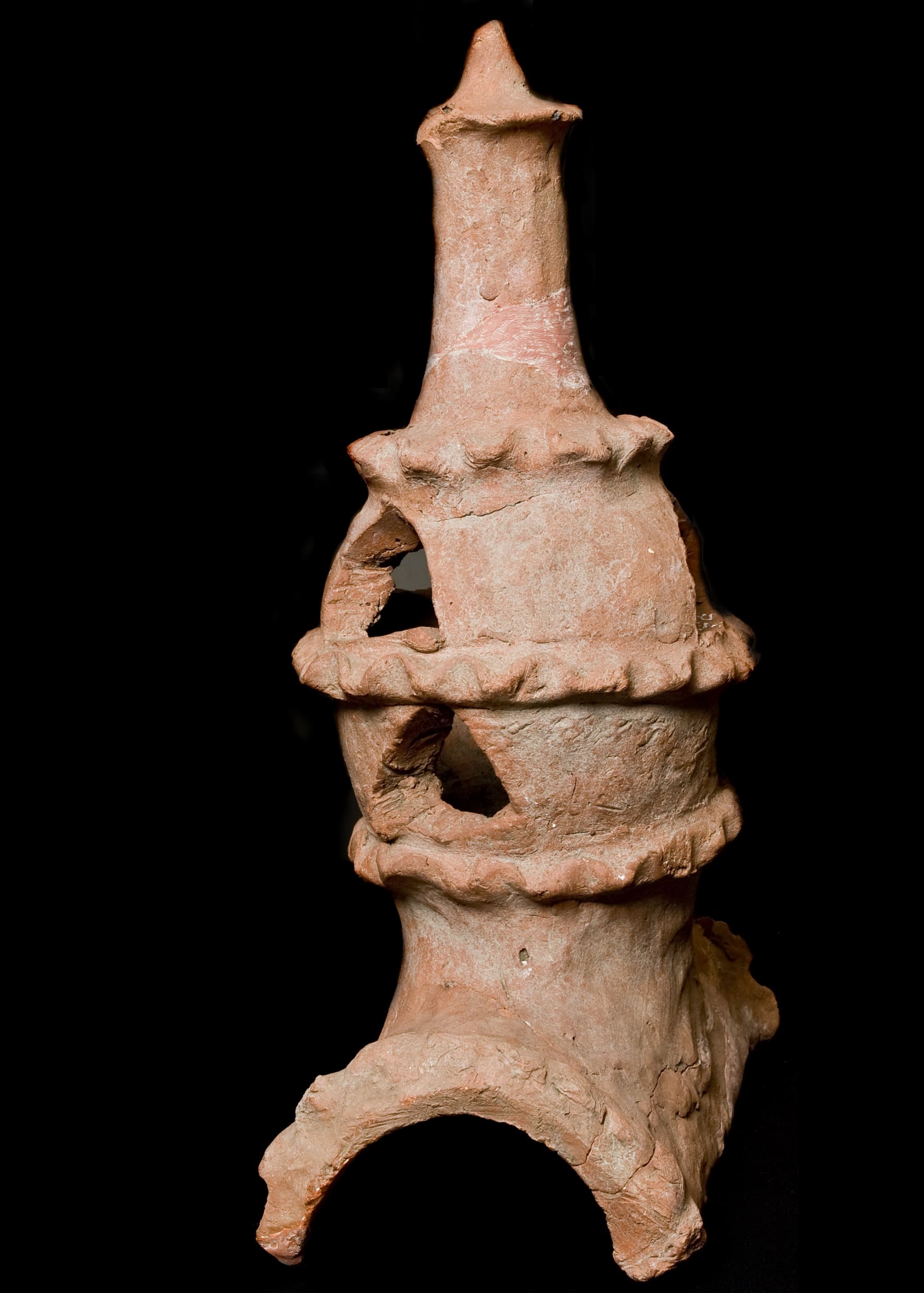 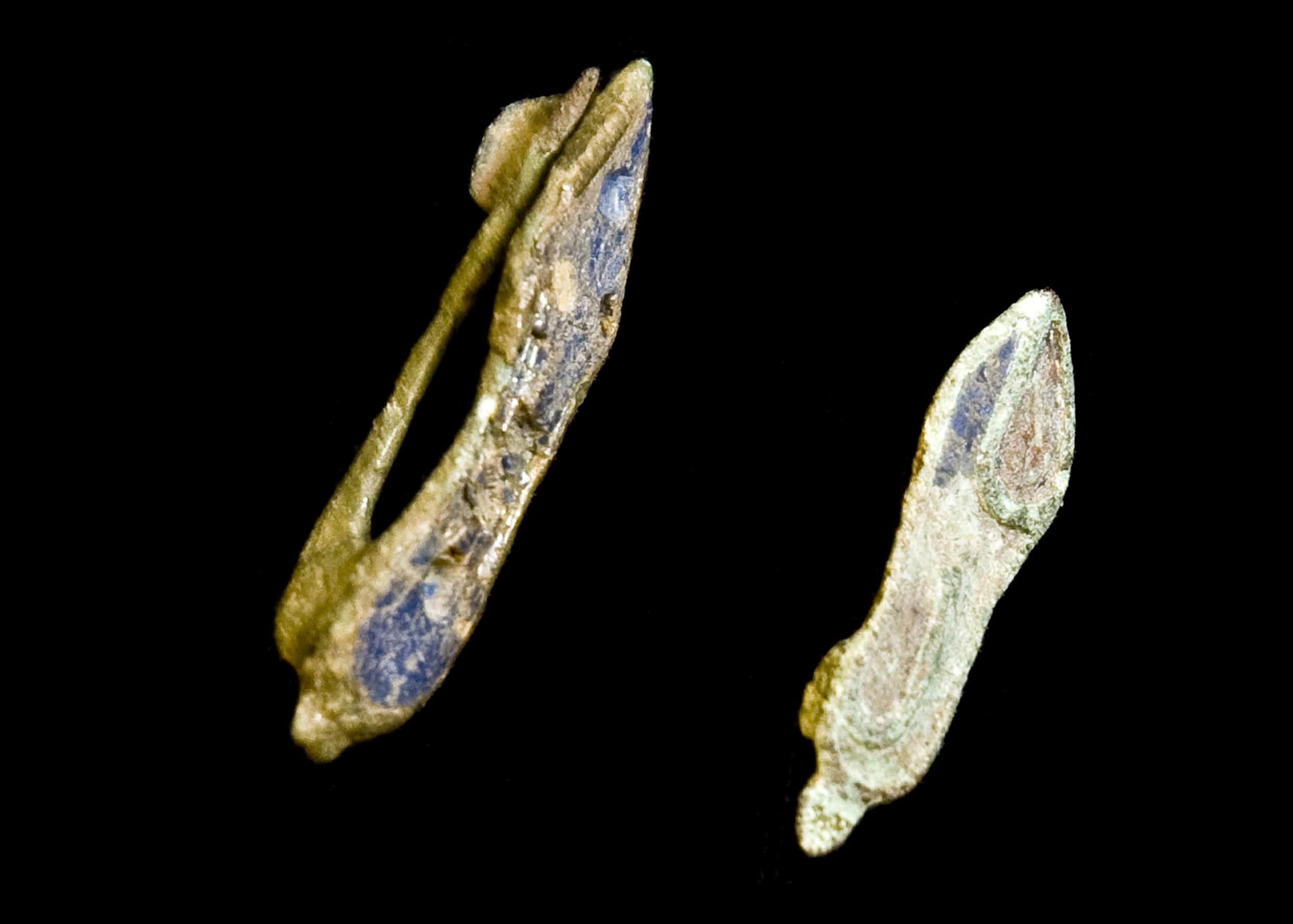 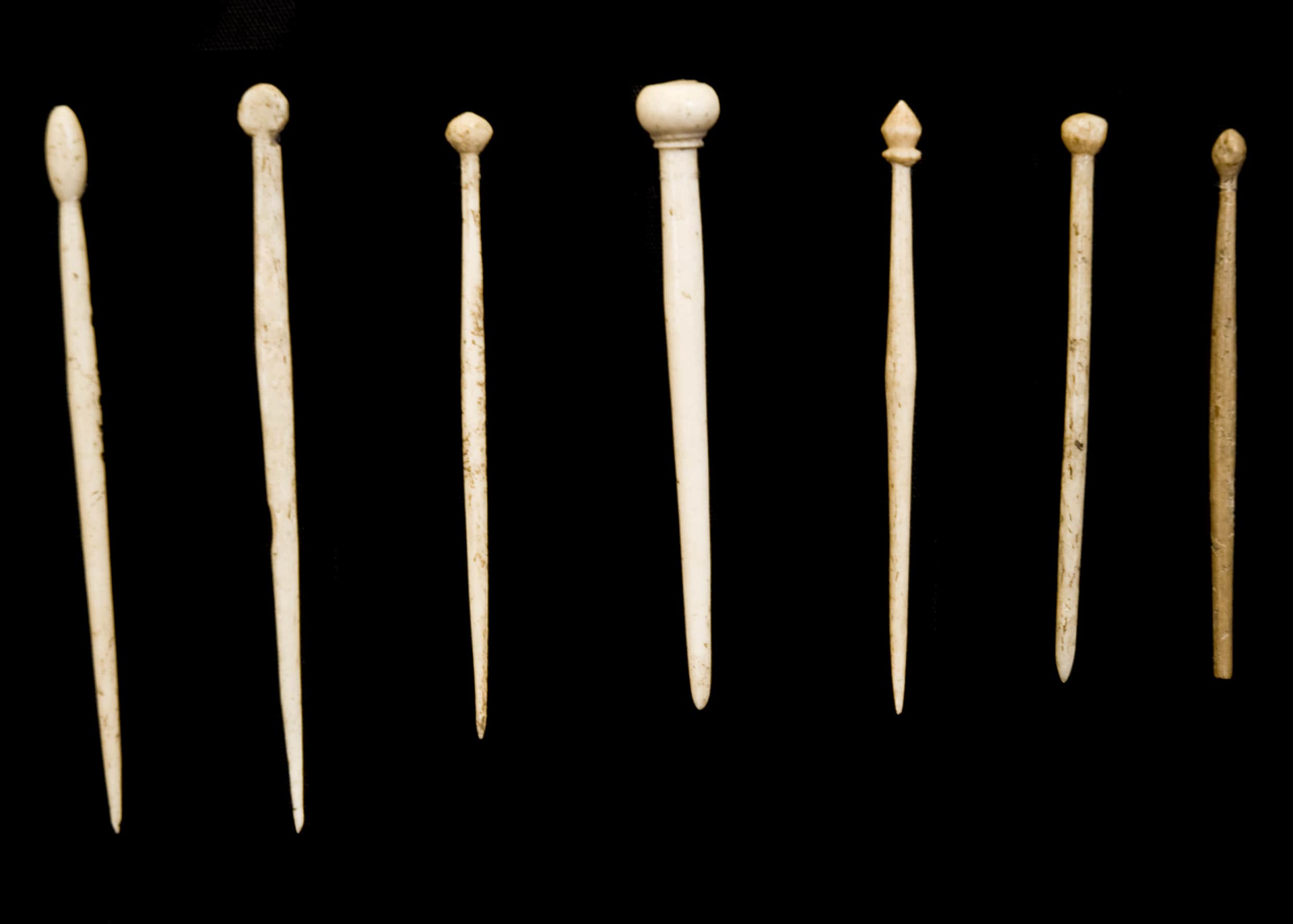 Set up by the Commander of the cavalry unit, originally from Gaul (France), but which was based at Malton in the mid 2nd century AD.

A child has walked over this roof tile before it was fired leaving a foot print. Others in the collection have prints of animals and
birds. 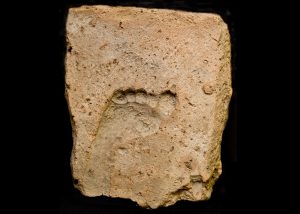 A room in the same building had wall plaster with images of gods and goddess. This figure, with a halo of light and carrying a sceptre, may represents Jupiter. 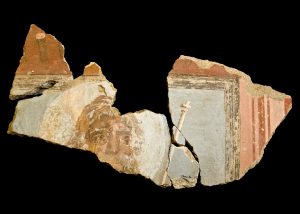 Made in the pottery kilns at Norton, with applied decoration depicting blacksmith's tools, wheels and arms, these vessels are thought to be associated with the worship of a smith god. 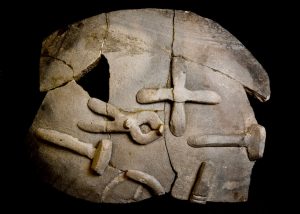 These tiny vessels may have had votive significance. Full-sized amphorae were used to carry wine, fish sauce, olive oil and olives from various parts of the Roman Empire. 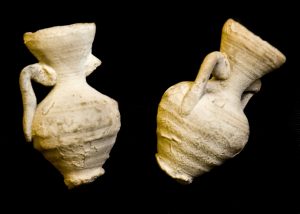 In the shape of Roman sandals, these copper-alloy and enamelled brooches may have been deposited as votive offerings at a shrine. 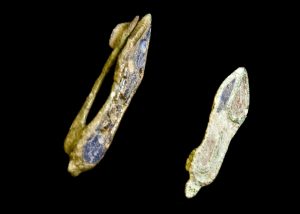 Sitting over the apex of a tiled roof, this could act as a chimney or, more likely, as a vent, possibly from a bath house. 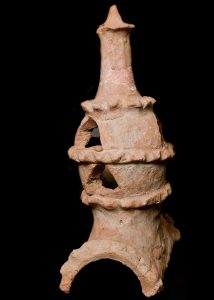 A tiny figure of a bear carved from jet. Found in a child's grave at Malton fort, the bear is thought to be a symbol of protection. 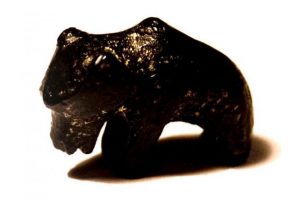 A selection from the many bone pins found at Malton. They were used by women in their elaborate hair styles. 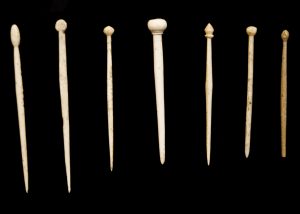 The iron edging from a spade and the blade of a hoe, both from Langton villa a few miles away from the Roman fort. 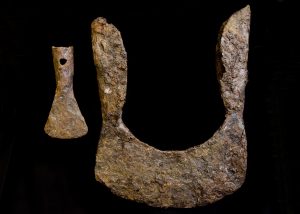 Trajan's column in Rome depicts soldiers carrying these objects, thought to be mess tins or saucepans. The maker, Alpicus, has stamped his name on it, as has Lucius Servenius Super, thought to be the object's owner. 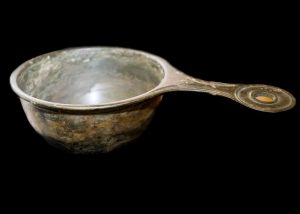